Assets : You should have the assets for the new weapon from your 3D artist.

For this tutorial, download this file, created by Slayer: Banhammer Assets Extract the folder into your SWGEmu_Dev/ folder, creating a subfolder called TRE-banhammer

In this particular example, we have a folder with 5 subfolders, all which would sit inside a TRE file (ignore the misc folder for now). 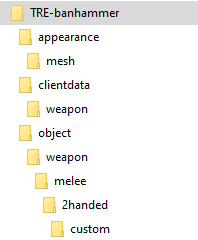 This is the file in SIE:

The DERV value points to the base object that this weapon is inherited from object/weapon/melee/2h_sword/base/shared_2h_sword_base.iff (it’s different in the above TRE because I forgot to update it)

The 004 element is to identify weapon effects used when the weapon is used to attack. Nothing to change here.

The parameters under 0007 do not need changing Don’t worry too much about all this, this is a quick intro into how some of the TRE file objects work. Once again the SHOT node has a DERV node whose parameter points and the inherited object

Now, in the base SIE install, for some reason the template for SHOT->0008 doesn’t show the stuff we need, so down in the bottom right, here’s a little box with template info in it – paste in the following:

and you’ll see this :

and then up above it it will split the data into something more editable so once you’ve edited the template, the data above is ready for editing and you should change it to be like this :

The second XXXX field contains the string details for the weapon description, make it look like this:

the value for this needs to be the path to your appearance file – it should be set already a little further down is one called clientDataFile – this weapon has this entry because it has a special effect added to it and details of that effect sit in the cdf (client data file).

and that’s all you need to know about the object iff for now.

if you go to new editor/new iff editor and open the appearance file you’ll see a very simple format file. This usually points to the Mesh (.msh) for the object, or sometimes to a Level Of Detail (.lod) file. Here, it’s nice and simple and points straight to the mesh.

ok, so new editor/new iff editor again and open the mesh file appearance/mesh/sr_admin_banhammer.msh in this file, for your sanity, ignore everything until you see the NAME node (MESH->0005->SPS->0001->NAME)

as you’ll see, the template doesn’t match the data, so down in the bottom right, it’s time to do a quick edit – replace the contents of the box with

At the top you’ll now see

you don’t have to do this, as you’re not changing anything right now, but I’m trying to give you a little understanding of SIE Further down you’ll see other NAME nodes (under 0002, 0003 and there would be more if there were more shaders) 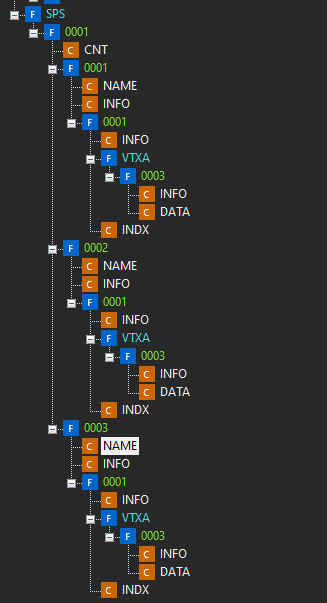 So here we have 3 shaders

You know the score by now, let’s go see what the shaders point to.

Now, while doing this, I’ve noticed 4 shader files in the shader/ folder – I think one is redundant.

Anyway, if you open one of the .sht files, you’ll find another tre structure with a NAME node on it.

This points to the texture used for that shader, in this case, texture/grip.dds

Each of the shader (.sht) files points to the textures required.

Don’t try and open the .dds files in SIE, it will just crash it.

You need an editor, such as Adobe Photoshop (with the PS DDS Plugin) to open/edit/create these.

Finally, you can open the .cdf file from the clientdata folder and see that it points to a .cef file (client effect) which you don’t have in this TRE, as it’s an existing effect from the SoE TRE files.

So to recap, you have an object (often referred to as a TANO – tangible object) which refers to other files that it depends upon.

That was mostly unnecessary for getting the object into game, although you need to know the names of things.

There are some IFFs that are missing that you will need to update for the new object.

Instead of passing names and descriptions of things between the client and server, and to enable localisation if you’re supporting multiple languages, it passed a StringID eg, the objectName field in the object.

These need to be set up so that the client knows what to display.

So, referring back, you have ObjectName – weapon_name – banhammer weapon_name refers to the string file that contains the StringID banhammer

So, back to the Repo view in SIE 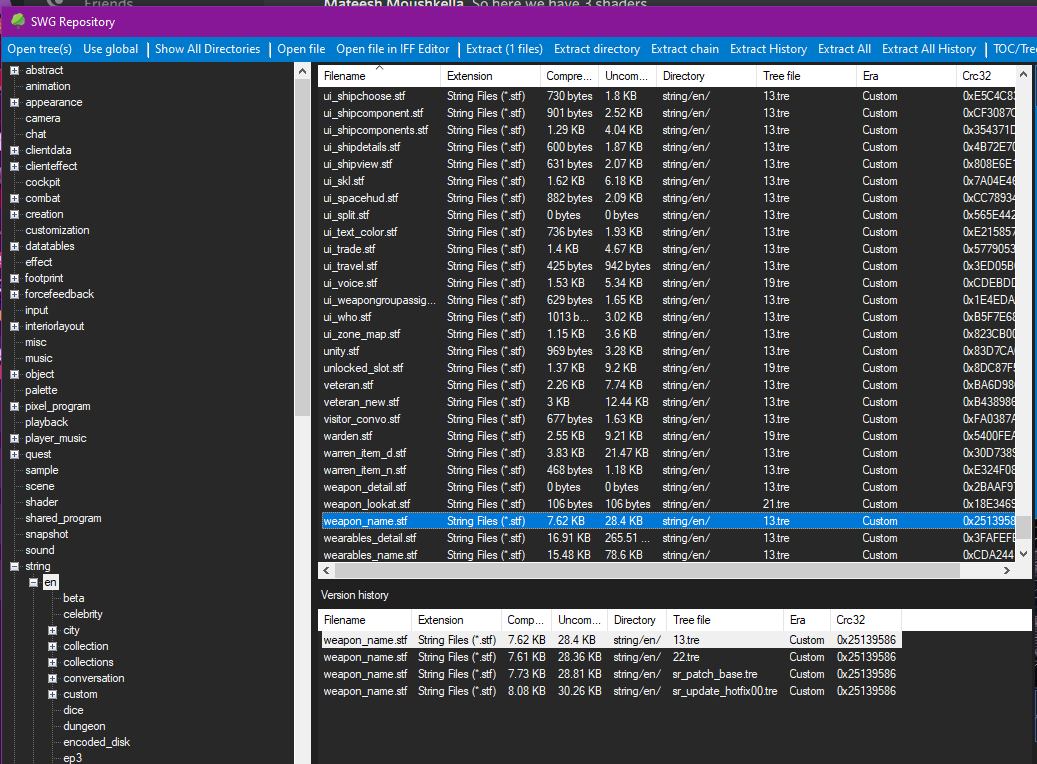 In the bottom pane you’ll see a list of the TRE files in which that iff can be found you’ll want to extract the latest of these, in this case it’s the Patch12_00.tre entry, so right click that and click extract (1 files). (ignore the fact that this image shows a different TRE name).

Now it’s back to your IFF editor, so switch to the other SIE window, new editor/new STF editor and open file then browse to your TRE-banhammer folder and you’ll see an new folder under it called string with one under that called en and in there is the weapon_name.stf that you’ve just extracted.

To add one for the banhammer string ID, you enter it as shown and click the large blue + button to the right of it.

If you remember, for the description, the String File was weapon_detail so you repeat the above process to extract that file from the repo, edit it and give it a description, such as an Admin tool for removing problems, then clock save.

The final bit of IFF work is one that you will repeatedly forget and you’ll notice it when you get invisible objects in game. it’s referred to as the CRC STRINGS file.

Similar to regular strings, the client and server don’t pass full object paths and names to each other, they instead pass a checksum, which cuts down on data transmission and bandwidth.

These checksums are held in a file. The search function is useless on this part of SIE. 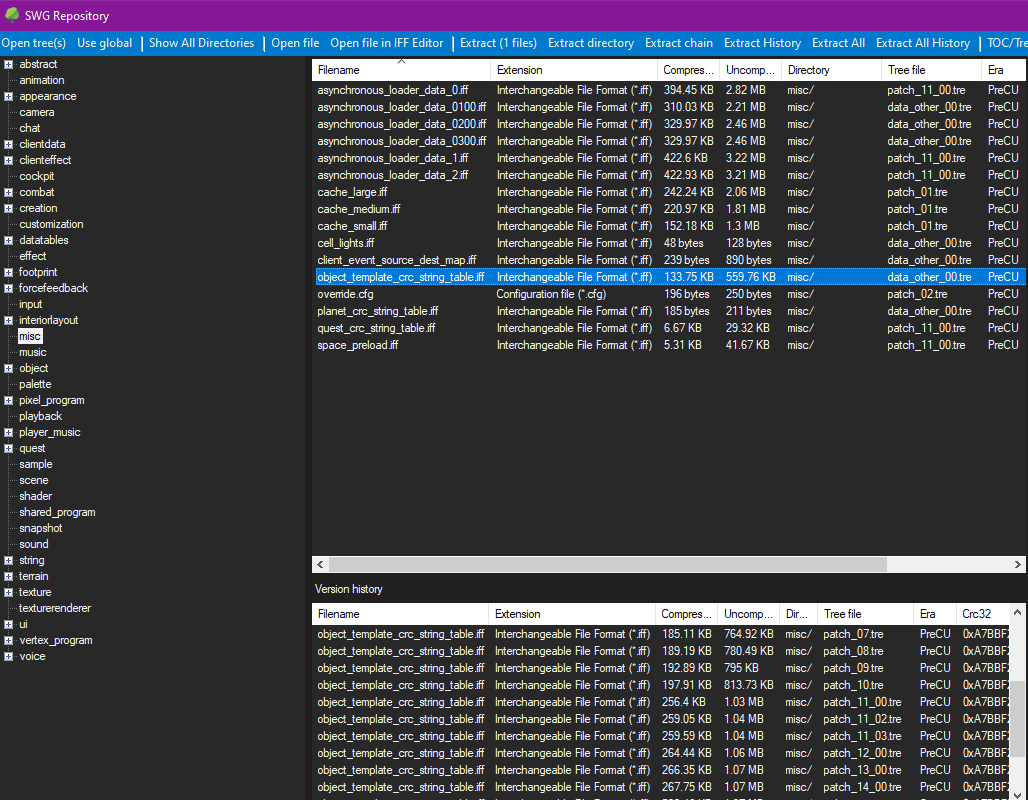 It’s important to always use the latest version of this file when creating your release TRE file or you’ll wipe out other objects that were in the newer file.

right click the CRC file under Patch14_00.tre and Extract (1 files)

open the misc/object_template_crc_string_table.iff file that you extracted above.

now you have 1 new object in your TRE-banhammer file, so click Add From and Files

browse to your object folder and through the subfolders to your shared_banhammer.iff file, select it and click ok, then click save.

The final action is to create your new TRE file and add it to both the server and client configs.

In the REPO window of SIE, click the TCO/TRE builder menu option and choose create .tre from directory on disk

Browse to your TRE-banhammer folder and select that folder Choose a folder (maybe Desktop?) to write your new TRE file to, name the file banhammer.tre and click Save.

You now need to copy that .tre file to :
c:\SREmu_Dev (or whatever your dev client folder is) and to the Server in the TRE file that you have set up (possibly home/swgemu/Desktop/SWGEmu)

In your client folder, open swgemu_live.cfg, add your tre to the list of TRE files with an incremental number from the previous entry, and make sure the maxSearchPriority number is at least equal to this.

On the server, edit the MMOCoreORB/bin/conf/config.lua file, make sure your TRE folder is the one that you copied the tre file to earlier, and add “banhammer.tre”, to the top of the tre file list, if it’s not already there.

When you restart your server now, use the command ./core3 reloadStrings to load the CRC String changes.

The object is now loaded into your server and can be accessed from the client, but there’s no information for it to do that – time for some LUA work